On November 5th, tragedy struck in Houston, Texas at the Astroworld music festival. Due to a life-threatening crowd surge. Since the event, nine concertgoers have died, and many others are in critical condition or with serious injuries. From one-on-one interviews with those who attended the concert, the public is seeing how there were many negative things that led to the tragic crowd surge at Astroworld.

The Astroworld venue did not prepare for the number of people attending the concert. Consequently, there were too many people in one area to get reliable cell service. The lack of connection and service resulted in further panic during and after the crowd surge.

A lack of cell service due to network overloads is something that all venues need to address. The Astroworld venue should have been prepared for the possibility of network interference and employed the proper technology—like signal boosters with das antennas and COWs—to solve the potential problem.

A lack of cellular connection is not only dangerous and upsetting for those attending the concerts, but it is also concerning for the emergency workers. Read this article to learn about how venues and large event planners can ensure in the future that critical communications will stay in operation even amongst large crowds.

Astroworld is a music festival that has happened every year since 2018, aside from 2020 due to the COVID-19 pandemic. Each year, the festival gains attendees with more headliners and performers.

Travis Scott, an influential rapper, was the organizer and headliner for Astroworld. During Scott’s 2021 performance this November, there was a crowd surge. A crowd surge is when a large group of people moves suddenly in one direction in a confined space. When a crowd surge happens at a concert, people tend to move quickly to the stage where there is a barrier causing compression and panic.

Crowd surges are extremely dangerous and when large enough, they can be life-threatening. During the crowd surge at the Astroworld concert venue, eight people died. Since the concert, hundreds were injured and hospitalized, and two more victims have died.

During many interviews after the event, many concertgoers reported not having a cell signal to call for help or contact family. This lack of connection and critical communication caused more panic during and after the crowd surge.

How can future venues ensure cell signals or improve the odds?

There are multiple ways large venues can prevent a lack of cell service during events. Two quick and easy solutions are COWs or cell on wheels and antenna signal amplifiers or das antenna systems. Both options can help tremendously but it depends on the venue for which one is best.

How are COWs helpful?

COWs or portable cell towers are important for mission-critical communication situations. A cellular on wheels is used to create or boost cellular networks for big events, emergencies, or while a tower is being built. A portable cellular tower includes a tower, transceiver, and other necessary equipment on a truck or trailer.

Portable cell towers have been used for a variety of situations, ranging from emergencies like Hurricane Katrina and 9/11 to routine gatherings like the Presidential Inauguration. COWs are used to provide signals in areas that are remote or during situations where networks will be overloaded. 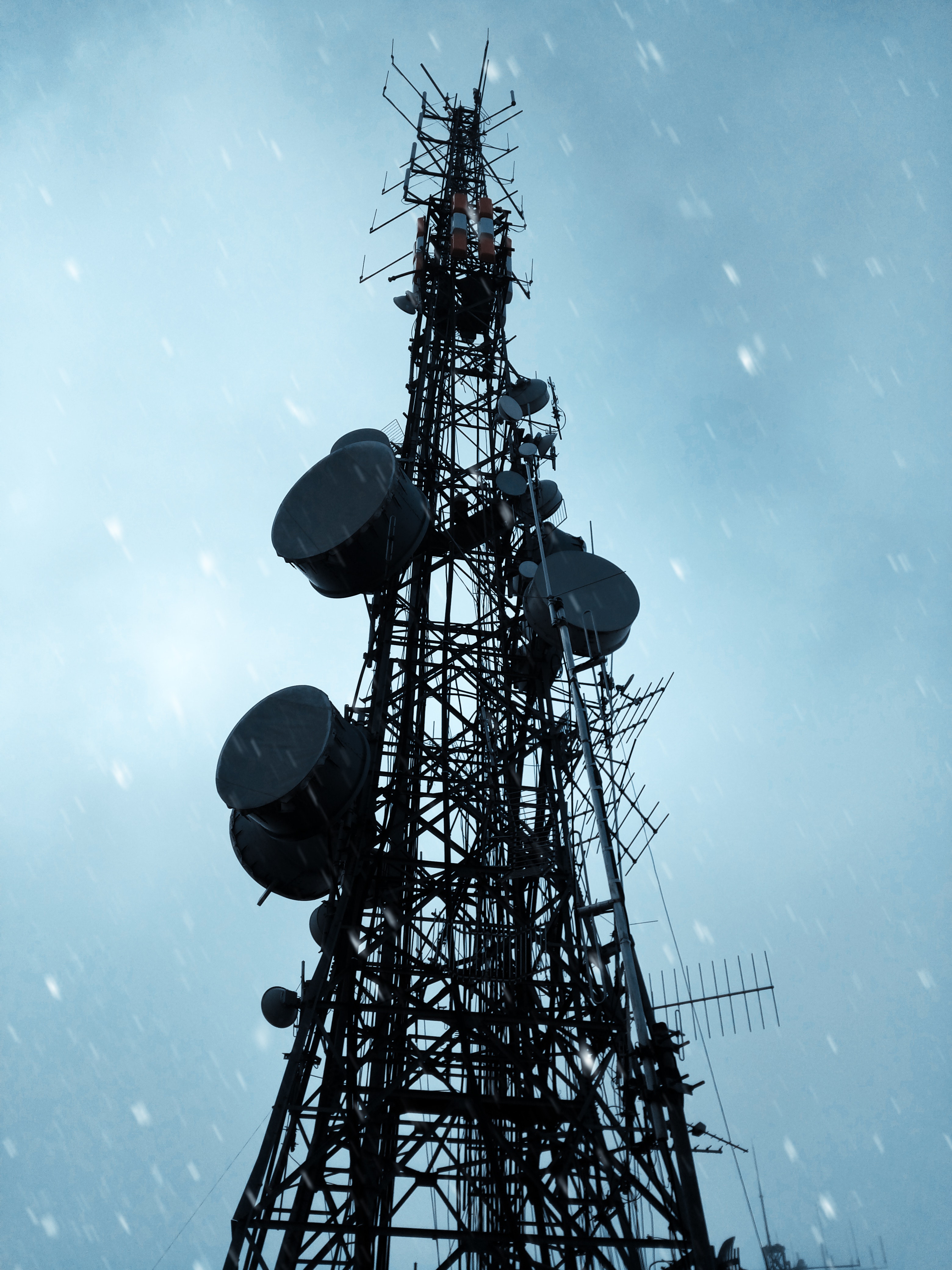 Therefore, portable cell towers are an optimal option for concert venues looking to bridge a connection gap. Venues can decide to rent a cellular on wheels COW for a particularly large event, or they can purchase them and install them permanently like the National Mall in D.C. To learn more about COWs, how they work, and why they are useful, check out our article: Everything you need to know about cell towers on wheels.

How are antenna signal amplifiers useful?

DAS or distributed antenna systems are used to improve indoor and outdoor cellular signals. The system can support only a certain number of users, so it must be scaled to the venue’s size and occupancy levels. With a DAS installation, a venue can guarantee an improvement of mission-critical communication quality and reliability.

The setup can take some time but it depends on the type of system for the level of invasiveness during installation. Overall, to set up a DAS, antennas or signal boosters are placed strategically throughout the venue’s interior. Then, the antennas are connected to a remote which connects to a centralized headend that distributes signals between the service providers’ base stations and the DAS. 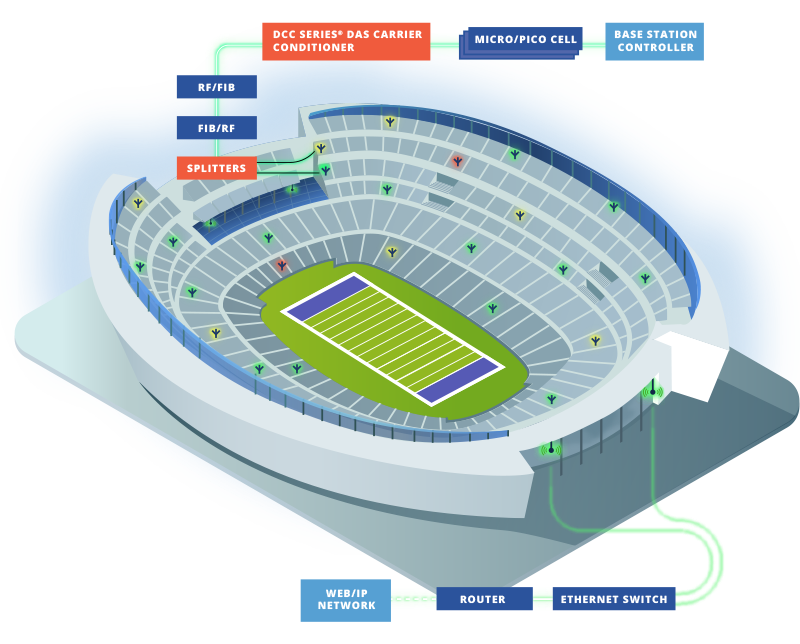 DAS has been used since the 1980s, it is a reliable technology that is made for large areas that attract large gatherings of people. Whether it be an office building or a large concert venue, DAS is a reliable permanent solution for closing a coverage gap.

To learn more about DAS, read our comprehensive article here.

How much does each cost:

The cost of portable cell towers:

A COW or cell on wheels can be costly. A typical COW costs around $45,000 or more when bought. However, COWs can be rented by the month by concert venues for about $4,000 a month.

To learn more about the price of COWs check out our article here.

The cost of DAS:

The cost of installing DAS depends on the type the concert venue chooses. An active DAS runs more expensive than a passive DAS. Installation can cost between 2-4 dollars per square foot for an average active DAS. Moreover, if a venue chooses to install an active DAS that supports multiple carriers, the price increases to 5-10 dollars per square foot. Keep in mind that these prices include the cost of both installation and equipment.

If a concert venue chooses to install a passive DAS, it will be cheaper because the installation process is less invasive. A passive DAS tends to cost about $1 per square foot. A passive DAS pricing does not fluctuate as much as active DAS because there are fewer factors to consider.

To learn more details about the pricing of DAS go here.

It is common for places of large gatherings like concert venues to lack cell phone service; however, this problem can be addressed and solved. The more concert venues that implement technology that will improve critical communications, the better.

Today, more than ever, humans are reliant on reliable connectivity to ensure they can communicate with family and friends. When that connection is blocked during an emergency, panic increases.

The Astroworld crowd surge tragedy killed ten people so far. During the life-threatening emergency, most of the concert attendees did not have a cell signal. This problem needs to be addressed. With solutions like portable cell towers and distributed antenna systems, concert venues like Astroworld can provide more reliable cell signals.

Our thoughts are with the family and friends of all who died.