Motorola and L3Harris are two-way radio manufacturers leading the public safety industry. Earlier in 2020, Motorola introduced the Motorola APX Next, said to be the future of radio. With a new design and life-saving features, Motorola has completely reinvented the APX series.

But how does the Motorola APX Next compare to another popular radio option, the Harris XL-200? Both radios are used by law enforcement and firefighters daily to communicate with their team and dispatch.

The Harris XL-200 multiband next-generation radio and the Motorola APX Next are both LTE and P25 radios with GPS, Bluetooth, and Wi-Fi coming standard but one radio seems to have more updated features than the other.

We’re exploring the new features in the APX Next radio and comparing it to the Harris XL-200 radio. If you’re deciding between radios, this will show you what you should know when it comes to each radio so it’s easier to decide which one is best for your fleet.

Both Motorola and Harris radios are built to withstand the typical environments public safety experience daily. The Harris XL-200 uses a metal I-beam frame meeting MIL-SPEC standard (MIL-STD 504.1) for fluids and flammability. The Motorola APX Next is tested for extreme ruggedness and meets MIL-STD 810 military standards.

Harris XL-200 and the Motorola APX Next both have an IP68 rating which lets the radio be submerged in two meters of water for around four hours at a time.

The Motorola APX Next radio has a one of a kind large 3.6” touch screen. The touch screen is easily operable in any weather condition and can be used while wearing gloves. No matter the lighting, the radio touch screen is always visible.

On the top of the radio, the Motorola APX Next has a large 1.2” color display allowing you to see status updates just by glancing down, keeping you alert and informed while on the job.

The APX Next comes with a new antenna that improves comfort and wearability, so it won’t interfere during shifts or emergencies.

The Harris XL-200 radio is available in two different styles. One style incorporates a short keyboard with an LED display and another style with a full keypad and LED display. The radio A-B-C-D switch for 64 talk groups and knobs are easy to operate while wearing gloves. This radio was designed to stay out of your way and be handled with one hand.

The Harris XL-200 also has a top display so you can quickly look down while still being alert. The battery on the radio is designed to not add bulk to your belt.

Battery life is important because your radio is your lifeline and you always depend on it for receiving critical information and keeping you safe. Between charges, both radio battery life goes beyond the normal 8-hour shift.

What makes the Motorola APX Next radio so unique is the new technology designed to benefit law enforcement and improve communication and safety.

These new applications are,

Communicate with your team by sharing texts, images, videos, and voice notes easily on the new touch screen.

Always stay connected with your team no matter where you are. Connect and locate other first responders right on your touchscreen. This helps increase situational awareness, teamwork, and security. Motorola’s 2019 Law Enforcement Survey claims that 47% of agencies want technology to improve situational awareness. That’s just what the Motorola APX Next does.

As stated before, the Motorola APX Next is a P25 radio system. Smart Connect helps maintain your P25 voice and data communication. The radio automatically switches between P25 and broadband even if you are outside of coverage (other jurisdictions or indoors)

ViQi is a virtual assistant letting you get information fast. All just by asking her. ViQi gives you rapid responses that let you check driver’s license and change the channel. ViQi simplifies tasks you can stay focused. ViQi voice and communication come through a newly designed speaker microphone.

Updating your radio fleet now takes minutes instead of months by using cloud-based programming reducing the time and resources needed to update. You’re now able to program 1000 radios in 10 minutes.

The radio is equipped with situational awareness for user safety including a Man Down signal, alerting dispatch when radio detects unusual tilt or inactivity, and tier 2 GPS location services.

Both radios are secure voice and data encryption for safe communication. Harris XL-200 uses multiple encryption methods with standard single key AES, so you can communicate with whoever you need.

The Motorola NEXT radio utilizes 256-bit AES Single Key encryption. Encryption is important for law enforcement communication to have secure protection from scanners and eavesdroppers. The last thing you want is someone listening in on private information.

Both Motorola APX Next and APX 6000 have Bluetooth but have different versions. The Motorola APX Next uses version 5.0 while APX 6000 uses version 4.0. The XL-200 and APX Next are AT&T and Verizon Certified and FirstNet Ready device. Introduced in 2012, FirstNet and Verizon OnCloud are cellular networks designed just for public safety during emergencies and are growing in popularity.

The frequency bands for the Harris and Motorola radio are the same, using Multi-band and single band configurations with VHF, UHF, and 700/800 MHz bands.

Both Harris and Motorola radios are designed to keep law enforcement safe and keeping communication as secure as possible. Motorola APX Next is a new emerging radio with applications helping public safety. The Harris XL-200 utilizes situational awareness and clear audio for easier communication across teams. As new radios slowly emerge into the industry more advanced features and capabilities are only going to improve. 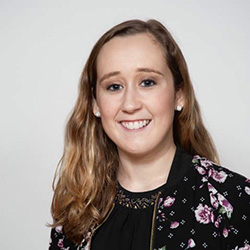 Taylor Thomas is from Mount Airy, MD. After graduating from Salisbury University with a B.S. in marketing Taylor completed a marketing internship with TSL Marketing. Her time at TSL was spent redesigning blogs and various pages on the company’s website as well as social media planning. Following her tenure with TSL, she worked in the marketing department for PB Dye Golf Club. Here she designed content for their social media accounts and promoted various events.

Taylor Thomas is from Mount Airy, MD. After graduating from Salisbury University with a B.S. in marketing Taylor completed a marketing internship with TSL Marketing. Her time at TSL was spent redesigning blogs and various pages on the company’s website as well as social media planning. Following her tenure with TSL, she worked in the marketing department for PB Dye Golf Club. Here she designed content for their social media accounts and promoted various events.

With the emergence of cellular networks, like First.net and Verizon Frontline, which are dedicated to first responders,...